Painted in 1998, the mural Hope for the World Cure, at Market and 15th Street in the Castro district, is one of the most potent public art works about the chaos and solidarity of AIDS in San Francisco and worldwide.
But a few weeks ago, in late December 2021, approximately one-third of the two-story mural was defaced with graffiti. Restoration will cost an estimated $50,000, according to Precita Eyes' Susan Cervantes, who directed the work's collective creation 25 years ago.​ 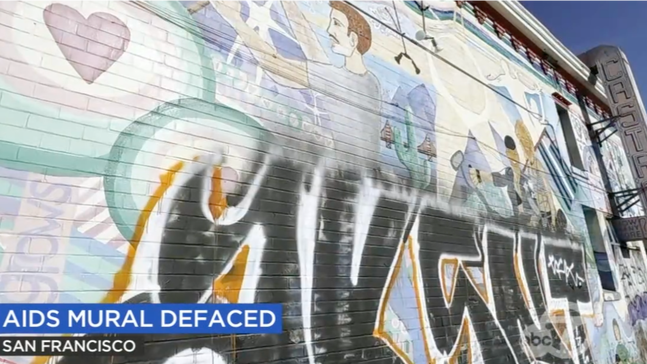 ABC7News shows the destruction.
​​RESTORE AND RENEW HOPE FOR THE WORLD CURE.

The mural, seen above as it looked when completed over two decades ago, was located behind what was once the popular hangout, the Bagdad Cafe (note name in upper left corner).
​DONATE HERE!!
Please specify HOPE in the donation form.
“THIS MURAL STILL HAS MEANING”

To the artists still living and families who were a part of this 24 years ago, "this mural still has meaning," says Susan Cervantes. “And it's not the only mural about the challenges of living with HIV,  — it's an important part of the history of the area and the people who live there.”

The defacing comes as no surprise as the mural has never been restored in its quarter-century. Repair of occasional tags and graffiti have been relatively manageable, but this current violation is “huge” and would require much time and material to clean and restore.

“It's become really hard to see the original mural and its unique message about the lives of those with AIDS/ HIV,” says Cervantes.

The challenges are many: the wall itself needs repair; a trash bin blocks a section of the mural; and the corner has become a frequent homeless encampment.

​District 8 Supervisor Rafael Mandelman denounced the vandalism, saying “the defacing of the historic mural is one of many awful incidents” at 16th Street, which has been “intolerable for years.”

Mandelman promised to approach the building's owners to encourage their cooperation in the restoration effort.

— Excerpted from Hoodline: Restoration of the Castro's poignant HIV/AIDS mural uncertain after being defaced by graffiti, Dec. 29, 2021. Text and photos by Steven Bracco.
​

“This mural was a dream from the heart come true. From the beginning of my HIV diagnosis to full blown AIDS, I had a dream from my heart, a full-length movie you can enjoy fully but feels sad when it ends. Hopefully, when I die or am cured of the AIDS virus, people will see scenes from my AIDS existence in this mural.”
— Collaborating artist Clif Cox
Precita Eyes Mural Arts & Visitors Center
2981 24th St., San Francisco CA, 94110  •  415.285.2287  •  General Info: info@precitaeyes.org
Proudly powered by Weebly