Precita Eyes in the News

Art for All to Make and Enjoy

Muralism is “very accessible to people,” says San Francisco mural artist Susan Cervantes. “It’s a real people’s art, in a sense, since they’re the ones designing and planning and painting it, usually.”

​Cervantes, who had painted in Balmy Alley, founded Precita Eyes Muralists in 1977. The art program based in the Mission encourages community involvement in the production of murals. The group has created about 700 murals at the local, national and international levels, often pairing artists with teams of local youth to produce community artworks. In San Francisco, these include the 1998 AIDS mural at Market and 16th streets, representing the LGBTQIA+ community, and the 2019 mosaic mural inside Chase Center, which is meant to unify the two sides of the Bay.

“When we get into true community process, it gets even more meaningful and empowering for everyone who’s involved in it,” Cervantes says.

Tales of San Francisco:
Preserving Hispanic culture in the Mission, as told by artist Susan Cervantes
Julia Buckley, National Geographic
​
Meet artist Susan Cervantes, the founder of a mural collective that began transforming the Mission district back in the 1970s and continues to mix paint, politics and passion in this traditionally Latin American ’hood.
It’s a sunny afternoon on Balmy Alley and artist Susan Cervantes is inspecting her life’s work. She walks up and down the mural-covered, block-long alley inspecting the paintwork. But there’s not much time to focus because people keep coming up to her. And then there are the two men carefully levering off the wall an enormous wooden baby emerging from a giant vagina.
“They’re delicate but just do your best,” says Susan to the workmen. The men are in the process of taking down a set of wall-mounted figures: a woman with her arms and legs splayed apart, and a man catching a child’s head as it’s born into what appears to be a river. Susan turns to me: “We’ve been waiting years for this,” she says.
“This” is going to be a new affordable housing building for senior citizens — something the area lacks. Historically the Latin American district of San Francisco, the Mission has long been prey to gentrification, but the past few years have seen a rise in the number of lower-income locals being squeezed out. The building the workmen are going to demolish to construct the apartment block is home to one of Susan’s best-known works: an enormous applied arts mural, Five Sacred Colours of Corn, inspired by the yarn artwork of Mexico’s Huichol people. It’s dominated by this joyful, spiritual birth scene.
“We see people bringing kids to touch the belly,” Susan tells me. Indeed, the woman’s face and womb (made of copper) are mottled and dented by the touch of many hands. “It’s been here almost 30 years and it’s something everyone wants to see back on the wall,” she adds. That’s why the men are taking such care; as soon as the new building is up, the artwork will be hammered straight back on.

When Chase Center opens Wednesday, Sept. 4, it will not only be the new home of the Golden State Warriors, it will also be the home of several pieces of art — and not just the sports-themed artwork common in arenas and stadiums.
There is art on loan from the San Francisco Museum of Modern Art and pieces commissioned for the arena through SFMOMA curators. There will be art on loan from the collection of JP Morgan Chase, the New York bank that bought naming rights to the complex. Then there’s the signature sculpture outside of Chase Center that will provide a TV focal point during game nights.
In all, there will be 87 commissioned pieces, 250 archival photographs and nine wall graphics both inside and out of Chase Center, all paid for by the Bay Area’s NBA team. To put it all together, the Warriors hired two consultant firms: Keehn On Art of San Francisco, and Sports and the Arts of San Luis Obispo, the latter of which supplied the art pieces on display at Levi’s Stadium in Santa Clara.
Most of the art will require a paid ticket to see it inside Chase Center, and some of it is in private clubs that only patrons with the most expensive tickets will see. But you can get a sneak peek with The Chronicle, which asked Warriors President Rick Welts for a tour and his 10 favorite pieces — five inside and five outside — shown here in no particular order:

The Bay by Precita Eyes Muralists
This tile-and-mirror mosaic by the famous Mission mural collective is 40 feet long and 20 feet tall, with references to cultural symbols and landmarks on both sides of the bay.
It is situated on the northeast corner stairway that rises from the corner of Warriors Way and Terry Francois Boulevard closest to the water. The basketball at its center is plated in 24-karat gold.
“The group itself (Precita Eyes) is the essence of San Francisco, and the concept of bringing San Francisco and the East Bay together is what the Warriors are about,” Welts says. “To have this come from the Mission District makes it my single favorite piece in the collection.”
Read more… 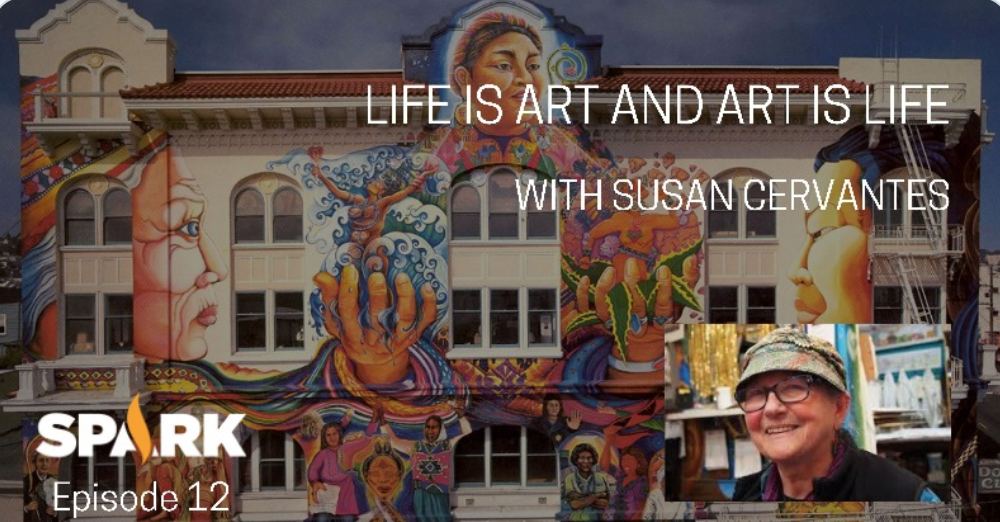 Kellee Marlow, hostess of Spark on KXSF.FM, interviews Precita Eyes Muralists founder Susan Cervantes, on the transformative process of creating monumental art through a community process. In addition to the hundreds of murals, she has created around the Mission district and across San Francisco and beyond, Cervantes discusses the legacy of creating new artists who had never drawn before, noting that “everyone has an artist in them.” (Interview conducted on Dec. 27, 2019.) 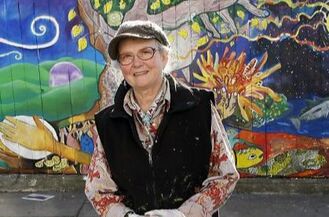 As a child, Susan Cervantes would play with her sisters and hide behind tall plants and saplings in her grandmother’s greenhouse in Dallas. Back then, she didn’t know she wanted to be an artist, let alone a muralist, but she says now that her family was always creating art, even if they didn’t know it. Her grandfather and father were self-taught musicians, and her sisters were bonafide quilt-makers, “I mean, they all knew how to sew, make their own clothes. It was just kinda what you did, a long time ago,” she tells me, half-smiling, “but I don’t think any of them thought of themselves as an artist.”

I sit across from the Mission muralist just as the sun sets on a windy San Francisco day, but we’re inside a warm, colorful shop with ‘PRECITA EYES’ emblazoned on a huge, marigold-yellow wall-mounted sign out front. Susan Cervantes, seventy-three, is well-known in the Mission community for her beautiful murals, and as one of the founders and the director of the Precita Eyes Muralists in the Mission District of San Francisco. Established in 1977, Precita Eyes is one of only a few community mural arts centers in the United States. Cervantes been painting her murals since 1975, she says, though she’s less than eager to tell me about her first. “I don’t know if I wanna say what my first mural was!” she chuckles, before sighing, “… well… I was invited to do a mural next door from where I lived, on Valencia Street, Valencia and 22nd, and it was called Coffee Don’s, and he wanted a mural on his wall and his business.” And Cervantes did so, in exchange for food. 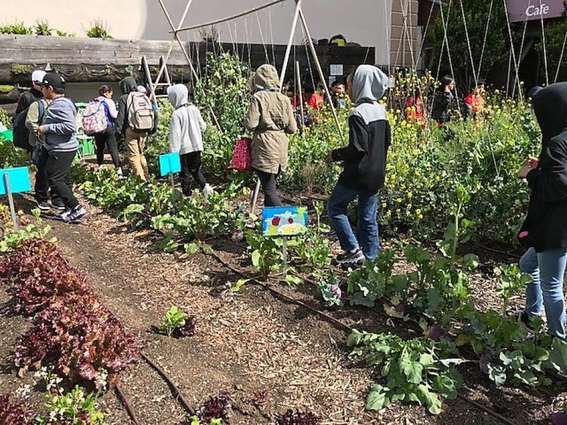 Children explore how vegetable superpowers can help the homeless
In homage to vegetables — compliments for carrots, bravo to broccoli, kudos to kohlrabi — about 120 third- and fourth-graders from Bessie Carmichael Elementary school made their way from their South of Market School to the Koret Auditorium of the San Francisco Public Library and to the nearby Tenderloin People’s Garden on Friday, March 23.
Onstage next to “Center for the Art of Envisioning Better” signs, the children read stories they wrote about imaginary superpowers they’d acquired by eating vegetables. The event, to which I was invited by Jonathan Moscone, Yerba Buena Center for the Arts director of civic engagement programs, was the culmination of a three-month-long project produced by YBCA’s Rebeka Rodriguez (curator of the partnerships), with 826 Valencia’s Jillian Wasick (the writing part and the publication of the stories in two books) and Precita Eyes Muralists (art in the community garden).
Principal Tina Lagdamen said her school has a performing arts and musical program, but no art teachers at all. The Yerba Buena-assembled team rotates through the classrooms, working with students on their art and their writing. Of the 700 students at the school, more than a quarter are homeless, said Lagdamen, and 100 percent qualify for free lunch.
​
Many of the essays read aloud included typical kids’ references — zombies and Katy Perry, for example — but several of the young writers described a superpower that would feed the homeless, “so they can feel better,” said one. Another envisioned a superpower in which, after eating carrots, she could use her hand to build a kind of instant house (“Then I told the homeless, ‘Go inside the house.’”).
​
read more…
2017 LATINO HERITAGE LEGACY AWARD, ANOTHER REASON TO CELEBRATE WITH US ON SEPT. 30

The ceremony took place at the "All San Francisco" community concert that inaugurates the SF symphony season, and highlighted Precita's 40th anniversary this year, and its "Collaborative Art: Celebrating Creativity in the Community" gala on Sept. 30.
ABC7 VIDEO: San Francisco muralists celebrating 40 years of brightening Mission District
This year marks a special anniversary for an organization that's brightened part of San Francisco while inspiring people to be artistic." (KGO-TV, July, 14, 2017) 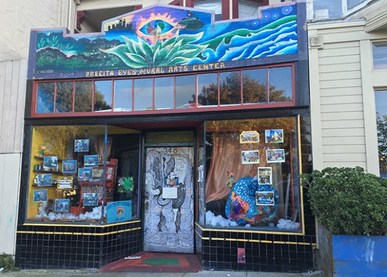