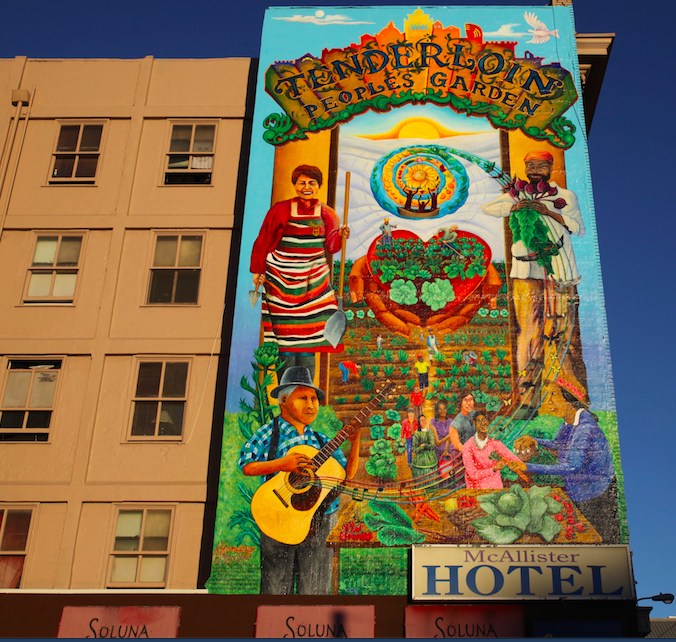 ​A New Mural Grows in the Tenderloin People’s Garden

November 16, 2016 — Every other Wednesday is harvest day in the Tenderloin People’s Garden, a patch of green in downtown SF's Tenderloin district. But on November 16, the garden bloomed with a different type of offering: the dedication of the new “Growing Together” mural.

Towering six stories above the garden from the McAllister Hotel on the corner of McAllister and Larkin, the mural is a collaboration between Precita Eyes and the Tenderloin Neighborhood Development Corporation (TNDC).

"The mural is a high fidelity representation of the energy in the neighborhood," said local gardener Kasey Asberry, of UC Hastings Law School (located across the street), “and of human scale amid enormous institutions.” Her comment is well-illustrated by this drone’s-eye view of the mural and surrounding buildings. The Tenderloin is the "undiscovered garden district of San Francisco," she noted, with at least a dozen gardens.

Artist Ira Watkins described his participation this way: "I stumbled into a good opportunity and I'm so glad I did. I met great people and I hope the public will enjoy our work."

As soon as the scaffolding came down in September, Precita Eyes and the TNDC were honored by SF Beautiful with its Seven Hills Award for making “a significant contribution to the creation of unique neighborhood character.” The SF Beautiful blogpost describes "Growing Together "as “a vibrant mural that exemplifies the community at its zenith.”

The Mural
At the mural’s center, a woman holding a shovel and a man with beets form the pillars of a gateway topped by a cityscape of Tenderloin landmarks. Vines spell out “Tenderloin People’s Garden” above a sunrise of San Francisco fog, signifying the early mornings when gardeners work. Hands cradle a heart of leafy greens, neighbors harvest together, and a guitarist plays notes transformed into birds, kale and spinach. The melody creates a spiral of water bearing a boat symbolizing the many journeys that bring people to the Tenderloin.

The People’s Garden
Created in 2010 on a vacant lot near SF City Hall in an area with no produce stores, the Tenderloin People’s Garden grows healthy food its low-income neighbors. Volunteers of all ages tend the plot and produce is distributed free twice-monthly.