News
Precita Eyes’ Class Act: Mural-Making at Schools
It's a sunlit day in late January, and Ms. Dox's 4th graders at JFK elementary pull taunt the red ribbon they're about to cut to inaugurate the mural they've been working on for months. 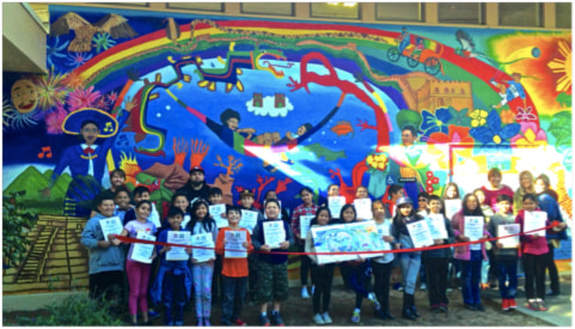 They've got the drill down pat, and it's not surprising. This is the school's fourth mural with Precita Eyes in two years, and the second this year.  (See "Our JFK Community Mural Project” , and "Legacy of Heroes Mural Project")

Murals, a bit faded, from collaborations years ago with a previous generation of students, still line the halls.

"They bring such light and life to our campus," says Matt Harris, the principal of this Daly City grade school. "They're a lasting legacy. We have parents who were here when those first murals were painted."

"So, how long do you think these murals will be here?" Yuka Ezoe, Precita Eyes Education Director and lead artist for this project, asks the class. "Maybe 30 years? You'll all be in your forties!"

The 10-year olds respond with groans and laughter.

The students named this mural "United."

"They had so much to say," says teacher Morgan Dox. "So many students are immigrants themselves or from immigrant families. The mural gave them a chance to celebrate their individual cultures. Students went home and asked their families about their cultural heritage and its symbols."

And the students?  Here are comments taken from reports they wrote, documenting their experience.

* "I didn't know what cultural heritage meant. I thought it might mean something about our culture. Then Ms. Yuka explained.  I drew things, like a cobra and Filipino food."

* "We had to draw signs of our culture and choose something to be on the mural. I chose an Aztec dragon from Mexico."

* "They asked us where we're from. Then we had to sketch something representing our country. They gave us books to get more ideas. I found it might be good to put the Great Wall of China there. I was happy to draw it."

* "I wanted my flowers and the Samoan flag."

Dozens of Murals, Dozens of Schools

In the past several months, Precita Eyes artists have led more than a dozen projects in area schools. The lengths of the projects differ, from long-term (up to three months) to instant (one-day) murals. So do the sources of funding, which can come from parents, community grants, arts organizations, or others.

But the methodology employed in the classroom is always the same: with grace and encouragement, the Precita leaders walk the students through these steps: theme development, research, sketch, composition, working to scale, creating the master drawing, gridding, transferring and, finally, painting.

One boy described the process this way: "Mr. Joe (Colmenares, the second Precita artist on this project) told us to put our pencil in front of us and pretend our pencil was a rose and to pretend to smell it."

Selecting symbols, picking and choosing, agreeing on colors and location of the imagery: it's a lot of collaboration for children. And sometimes painting can get a bit messy.

"Joaquin's mom helped us," wrote one girl. "My hair was down, so she made me look like the princess from Star Wars. Ms. Yuka gave me two kinds of paints and I tried mixing them. But they started dripping on me. So she helped me clean it up.